From the stone beating dance of Xinjiang, China to the street theatre of India, let’s take a journey to uncover the hidden gems of some of Asia’s most exotic art forms.Whether it’s the pastoral music of the Mongolian herdsman or the rhythmic moves of the Uyghur folk dance, ART LESS TRAVELLED goes off the beaten track to find unexplored cultural performances that will enthrall and inspire.

Filmed across 10 countries in Asia, the series allows viewers exclusive access into an unknown world of the arts.

Episode 1: FIRE (India, Thailand & Taiwan)
In this episode, be amazed by the power of fire as women in India perform the Charkula Dance in 108 oil lamps on their heads. In Chiangmai, the Fire Sword Dance master amaze with their moves and Fire Poi dancers in Taiwan set the night ablaze.

Episode 2: FORMATION (South Korea, Japan & Philippines)
In this episode, dance to the rhythm of mass dance Yosakoi in Kochi Japan, Pungmul acrobatics in Korea and the theatrical Singkil in Southern Phillipines.

Episode 4: PUPPETRY (Thailand, Vietnam & China)
In this episode, uncover the intricate performances of the stringed marionettes of Quanzhou in China, the ancient art of Thai puppetry with the Hun Lakorn Lek and the unique Water Puppets of Vietnam.

Episode 5: PROPS (China & Philippines)
In this episode, four amazing feats of endurance take centre stage. Be enthralled by the amazing Plate Dance from Xinjiang and the acrobatics of aerial tightrope walking. Hold your breath for the balancing acts of the Bench dance from the Philippines and the Rajasthan folk tradition of Bhavai, where one man balances up to 9 pots while standing on nails.

Episode 6: WAR DANCE (India, China & Indonesia)
In this episode, uncover art performances inspired by martial combat as we uncover a Shaolin musical extravaganza in China, the enigmatic Tari Mandau of the Dayaks in Indonesia and the huge mask Chhau dance of India.

Episode 7: CONTEMPORARY (Singapore & China)
In this episode, the spectacular Impression of Sanjie Liu musical of Guilin China will take your breath away. The Dance of a Thousand Hands Guanyin will inspire with its extra ordinary performers while the Singapore Luminous Dragon delights in the dark.

Episode 8: SPIRITUAL (India, Indonesia & Singapore)
In this episode, spiritual art performances take on different forms. In India, the single boys or Gotipuas transform into women to perform acrobatic contortions representing images of deities. Be enthralled by the 40kg mask dance of Reog Ponorogo in Indonesia and be surprised by a hidden tradition of the fire dragon in Singapore.

Episode 2: PROPS (South Korea, Taiwan & Singapore)
Across Asia, props have been used extensively to enhance performances and wow audiences. In this episode, we feature 4 Asian performances that use props in creative ways. Find out how these theatrical properties make a splash both on traditional art forms and contemporary theatre.

Episode 3: DRUMS (India, Taiwan & South Korea)
It comes in all shapes and sizes. It is a means of communication. It is also widely performed in rituals and ceremonies across Asia. We look at how drums are used in very different ways across three Asian countries. From India, to South Korea, to Taiwan, drums are a medium of hope, inspiration, and a force of life.

Episode 4 ANIMALS (Japan, Indonesia & India)
Our bond with animals goes far deeper than food and companionship. In certain performing arts, there isn’t even a clear line between men and animals. We spotlight 4 very different dances across Asia where men and animals are one in the art form. Watch how our relationship with the animals evolved from the ancient to the modern.

Episode 5: MASKS (China, Taiwan & Philippines)
The alluring and mystical qualities of masks exude an expressive power, both in rituals and various theatre traditions. Masks, worn on the faces of performers, have been used to disguise and protect. Watch how these magical masks transform the performers, allowing them to live out the dreams and fantasies of life.

Episode 6: FUSION (Indonesia, Taiwan & Singapore)
Asia, home to a melting pot of cultures and influences, offers a rich and diverse mix of art forms. We feature 3 performances across Asia that blends various traditions, disciplines and cultures for greater effects. Through these artists, we experience a limitless world with no boundaries.

Episode 7: CONTEMPORARY (South Korea, Thailand & Singapore)
In the world of contemporary performing arts, nothing ever stays the same. Old boundaries that were broken yesterday can spawn brand new ideas for today. We feature 3 cutting edge performances across Asia that break free from all the conventional rules and boundaries. 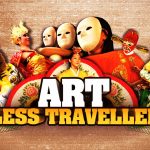