From legendary actor and icon, Amitabh Bachchan, comes ASTRA FORCE, his first animated series. A funny and fast-paced, action-adventure, superhero series, filled with laughs and thrills. When two 8-year old twin kids accidentally awaken an ancient super-warrior from the past, they must join him in saving the world from a new wave of giant monsters and a demon determined to rule the universe.

Episode 1- Action Replay:
Astra Force face a new villain Rok Tok who has the power to manipulate time. Our heroes must take care of this villain and his rag tag gang before they run out of time.

Episode 2- Pipers Payback:
Kids all over the city are falling prey to a new app on their phones and tablets. Astra Force must find out who is behind this in order to save the kids.

Episode 3- The Khalnayak Ring:
An alien ring with evil powers crash-lands on Earth. It is then discovered by Vigyaani who uses it to don the alter ego of a villain calling himself Angoothilaal.

Episode 4- Sticker Tabahi:
Astra Force come face to face with an ancient monster Azreal, who enslaves the warriors and beasts after defeating them in the battle. And this time he has his eyes on Astra Force.

Episode 5- My Friend Mullu:
Astra Force find themselves tending to the heir of an Alien Royal family after he crash lands on Earth. But this cute little alien prince takes a special liking to Tara and becomes her invisible guardian. 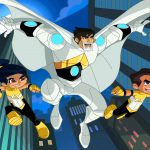