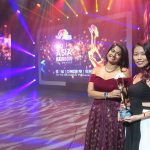 Congratulations to BIG FOOD, which was recently awarded Best Infotainment Show at The 3rd Asia Rainbow TV Awards in Macau. BIG FOOD is produced by The Moving Visuals Co. Singapore and distributed by Ying Group.

What does it mean to cook up a storm? Exploring the challenges behind making, managing, and moving massive amounts of food, this is the much talked about infotainment food series, BIG FOOD.  From a kitchen which feeds 80,000 people a day in the Golden Temple of Amritsar in India to a World Paella Competition in Spain, this 13-episode series discovers how these big feasts come together from start to end.

BIG FOOD was named Best Infotainment Show at The 3rd Asia Rainbow TV Awards and its host Greta Georges was nominated for the Best Entertainment Host at the 2016 Asian Television Awards.