Kung Fu Master. Principal. Celebrity. Athlete. Farmer. Wang Bi Sheng wants to be it all. Busy Body is a 13-part weekly half hour kids comedy series revolving around a young boy who mysteriously acquires the power to be whoever he wants to be – with some conditions. A social misfit, Bi Sheng’s life gets turned upside down as he is gifted with this unique power through a magical ‘Ten Dragon Jade’ on his 10th birthday. An occupation-based kids comedy, the series explores Bi Sheng’s abilities by switching places with a different person each week, and the lessons he learns about the job and the repercussions of his actions.

(Bi Sheng is not pleased to receive the ‘Ten Dragon Jade’ as a present on his 10th birthday. Unsure of its exact powers, he accidentally swaps bodies with his school Principal. Initially overjoyed with the opportunity to implement his own school rules, he soon realizes the school’s function as an education centre is compromised and has to reverse his chaotic actions to get things back to normal.)

(Bi Sheng swaps bodies with famous pop star, TT. He takes advantage of stardom to get whatever he wants, but it soon dawns on him that being an artiste requires dedication and hard work. As the story progresses he develops a deeper understanding and appreciation of the passion and commitment an artiste puts in the course of their work.)

羽毛球球员: 齐心协力，其利断金  Badminton Player: With united effort, anything is possible

(Bi Sheng swaps bodies with his sportsman Uncle Tony, who is in the middle of playing in a Badminton tournament. Bi Sheng is thrilled to take the racquet and grace the court but doesn’t realize the hard work and dedication required to be an athlete. Not being a team player, Bi Sheng starts to lose games and through the ordeal, gains an appreciation of athletes and the value of teamwork and sportsmanship.)

(After his parents refuse to allow him to keep a pet, Bi Sheng swaps bodies with an Animal Welfare Officer. Initially overjoyed with playing with the animals, he soon find the heavy responsibilties and duties a burden rather than joy. When he sees the repercussions of his actions, Bi Sheng is forced to understand what it takes to become a responsible animal caregiver.)

玩具店服务员: 言必信，行必果 Toy Store Service Staff: You keep your words, you know what you’ll do.

(Bi Sheng swaps bodies with a Service Staff at a toy store in order to have fun and play all day. This is a dream job until he has to face fussy customers, clear the mess created by irresponsible kids and work hard to understand the 3 products he is selling. Meanwhile, Mei En is upset, thinking that her best friend has forgotten her 10th birthday.)

(Mei En takes Bi Sheng to visit her uncle’s farm. Having been lazy all his life and taking things for granted, Bi Sheng finds the life of a Farmer is tough, and swaps bodies with Mei En’s uncle to have fun on the farm. Through his journey, Bi Sheng discovers a farmer’s effort of growing food as well as the negative impact of wastage.

武术师: 仁者无敌 Martial Arts practitioner: One who is compassionate is invincible

(When Bi Sheng and his friends are bullied near their home, they decide to enlist for martial arts classes. Bi Sheng gets a brainwave and tries to swap bodies with the Martial Arts Master, but the Ten Dragon Jade makes them swap skills instead. Bi Sheng takes advantage of his newfound skill to intimidate kids who are weaker than him. But when he realizes he has become a bully, he starts developing a deeper understanding and appreciation of the philosophy and values of martial arts as well as fosters a deeper understanding on the training and responsibilities involved.)

(During an arts excursion, Bi Sheng swaps bodies with a Ceramist to prove to his classmates that he is actually good at art. But unwilling to put in the hard work and dedication required to be an artist, Bi Sheng soon learns the 4 passion that goes into the arts, and develops a deeper appreciation of the skill and creativity a Ceramist puts in the course of creating art.)

校工: 行行出状元  Janitor: There are masters in every profession, one can distinguish himself in any trade.

(When Bi Sheng is accused of a crime he did not commit in school, he gets revenge on the janitor who accused him by messing up the school premises. When he accidentally swaps bodies with the Janitor, he faces a nightmarish experience, being forced to clean the messy school. In the process, Bi Sheng learns to appreciate the hard work a janitor puts in the course of his job and starts respecting the role each individual plays in society.)

(Char Kway Teow is Bisheng’s favourite food, and he swaps bodies with his favourite Hawker to make himself unlimited plates of his favourite dish. However, for someone who seldom enters his own kitchen and has many unhygienic habits, cooking becomes a disgusting experience. When he gets complaints and starts losing customers, Bi Sheng is forced to learn the importance of cleanliness and hygiene and save the stall from getting a bad reputation.)

(During a school excursion to heritage and cultural sites, Bi Sheng swaps bodies with a Tour Guide and plans his own fun itinerary. But the fun soon wears off and Bi Sheng starts to understand and appreciate the hard work and in depth knowledge a Tour Guide requires in the course of their job. ) 5

(Bi Sheng has been lying to his friends that his father is a Doctor, when in truth, he’s actually a Nurse. When his lies are revealed, Bi Sheng is ashamed and unwittingly swaps bodies with his father. Both are shocked and annoyed with this swap and attempt to do everything they can to swap back. Meanwhile, Mei En discovers that her ancestors are from the He Clan, and that they are the rightful owners of the ‘Ten Dragon Jade’.)

(Bi Sheng and his father have swapped bodies and are unable to swap back. Bisheng’s father goes to school where he behaves like an adult, much to the annoyance of his friends, while Bisheng goes to the Hospital and attempts to take care of patients. He soon learns the dedication that goes into providing healthcare services and the important role a Nurse plays as a caregiver. But things get worse when they discover the Ten Dragon Jade is missing. Will they be stuck in the wrong bodies forever?) 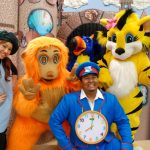